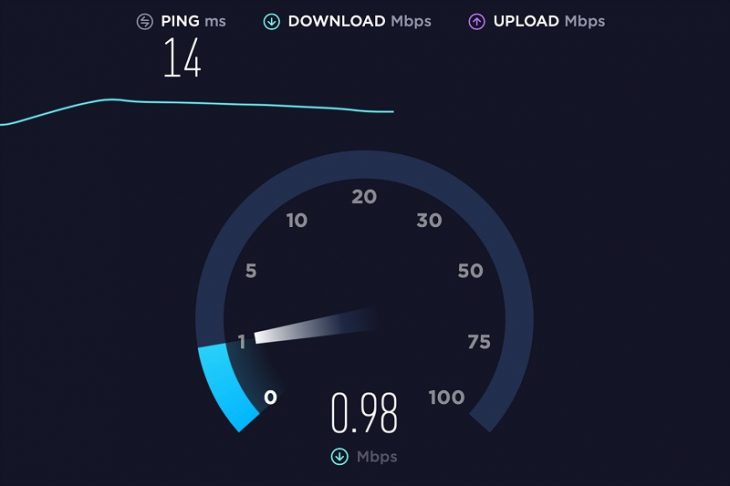 To run a test on the upload speed, the speed test runs the process for download test in reverse. It measures the speed at which the same file is uploaded to a nearby server.

Because the latency is measured several times, you can see the minimum, maximum, and average latency values in milliseconds (ms).

How Can Results of Speed Test Get Impaired?

Internet speed tests are not perfect. That’s because many things can affect the results of speed tests. This includes:

However, what needs to be emphasized here is that use means actively transferring or downloading data. If your device is only connected to the internet and nothing happens, your connection will not slow down.

Bandwidth can be thought of as a corridor. If just a couple of people are walking at the same time, everyone will be able to walk at maximum speed. But as a greater number of people walk in the corridor simultaneously, everyone needs to move slowly to move around.

The fastest speed can be obtained if the device can be connected with an Ethernet cable. This is called a “wired connection” and if you are looking for the fastest possible speed, it is usually a good idea to use this type of connection.

However, if you can’t connect your device with an Ethernet cable, it’s okay to use Wi-Fi. Keep in mind that different device types have different Wi-Fi settings. In other words, one device may give better results than others.

Your Router Is Not up to Date

If you want to use Wi-Fi or connect multiple devices to the Internet at the same time, you need a router. Also, if your router is out of date or you haven’t updated the firmware for a while,  your internet speed test results may be slow.

You Are Using a VPN

Using a VPN can slow down your internet. This is because the VPN routes your Internet connection to one or more servers, adding a layer of security and privacy.

For the most accurate results from running internet speed tests, we recommend turning off VPN. Don’t forget to turn it back on when you’re done.

How much speed do you need?

Here in the United States, 25Mbps is considered by the Federal Communications Commission (FCC) to be “high speed” Internet. We don’t necessarily agree, but the internet speed you need depends on what you want to do online and how many people are using that connection.

If you have only one person using the Internet at home, here are some general Internet speed recommendations:

If there are multiple users of a single internet connection, it is advisable to buy a package that offers speeds that are a little bit higher than for the categories mentioned above.

When purchasing an internet package, it is important to figure out what speed you will be getting once you get a connection. You will probably need a fast connection to stream live TV. Check out MetroNet TV Channels to get the best selection of channels for all your entertainment needs. The TV service is powered via MetroNet’s 100% fiber-optic network.