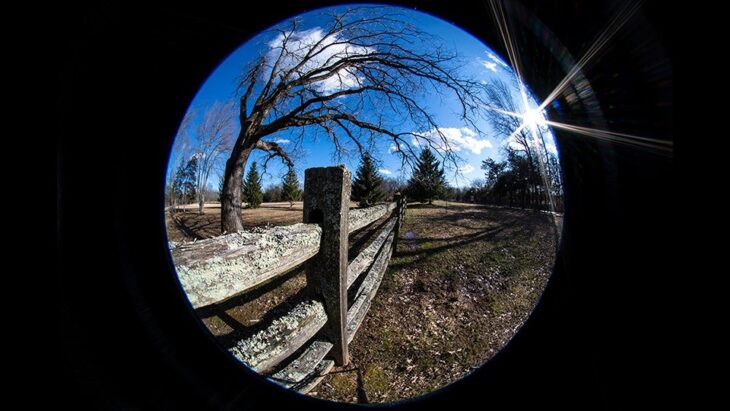 Fisheye lenses were initially developed for scientific study, but with time made their way into the gadget bags of photographers. But what exactly is a fisheye lens? Leaving aside the scientific/technical explanations, a fisheye lens is a super wide-angle lens with a diagonal view of 180 degrees or more (up to 220 degrees).

Fisheye lenses need to put everything within the 180-degree coverage into the film/sensor size it is designed for and cannot do that without causing the edges to bulge outwards (barrel distortion). You can have a circular fisheye lens or a full-frame fisheye lens. Fisheye lenses are available from Canon, Nikon, Olympus, Sigma, Tokina, Pentax, etc. The focal length would depend upon the film size/sensor size, but for 35mm type cameras, typically, they are between 8-10mm for circular fisheyes and 15-16mm for the full-frame.

But Why Is It Called A ‘Fish’-Eye And Not A Bird-Eye Or Something Like That?

When a fish looks at the outside world (from under the water, of course!), its vision spreads out to 180 degrees due to the refraction of light. That’s why.

If you have never tried using a fisheye lens, I suggest you try it now and see the visual impact it can create. Once you try it, you’ll know what you have been missing out on all along. There are two ways to using a fisheye lens: you can let the lens decide the picture (by continuously checking how everything looks through the lens and recording what looks nice to you), or you can first visualize the effect you would like and then position the lens to get the effect you are after. I suggest you get into the habit of doing the latter as it can make you more creative and increase your capacity to conceive an image in your mind.

This discussion should also clear a myth – ‘Wide-angle lenses create perspective distortion.’ Is that so? Take a picture of your friend using, say, a 24mm lens, but level the camera so that the subject is parallel to the film/sensor and keep the subject in the center about 10 feet from the lens. Do you see any distortion? Not! Now go very close to him/her, tilt the camera, and shoot again. Your friend now suffers from perspective distortion. So, is the lens responsible for the perspective, or is it the lens’s positioning about the subject that is responsible?

Note: There is a difference between ‘distortion’ and ‘perspective distortion.’ When we talk of ‘distortion,’ we refer to lens defects like ‘pincushion’ and ‘barrel’ distortion. When we talk of ‘perspective distortion,’ we refer to the caricature-like facial distortion or the leaning back of a tall building, or the apparent meeting of parallel railway tracks, because the camera was wrongly positioned when taking the shot. This happens due to the size relationship between the nearby and further away elements in a photo, caused by the camera’s wrong positioning.